Forty-eight walkers assembled outside Greenmount Old School on a mild but dull winters morning from where we made our way passed  the Church and through to Greenmount Golf Course. At the side of the club house we turned left onto a section of the West Pennine Way (WPW) that leads to Holly Mount.

Holly Mount was built in the 1860s as a College for Young Gentleman this closed in 1885 and the buildings were taken over in 1888 by a group of nuns from the order of Sisters of charity of Jesus and Mary and run as an orphanage for children from Roman Catholic families. During the First World War Holly Mount became a hospital for wounded soldiers. The nuns left the convent in 1992 and the main building eventually became a junior school with most of the other buildings, including the chapel, being converted into residential accommodation. The nuns planted an orchard to provide fresh fruit for the community which was abandoned when the nuns left and rescued in 2010 by Incredible Edible Ramsbottom and now provides a resource for the community.

At the approach to the orchard is a recently erected memorial stone to one of the founder members of our walking group which we passed as we climbed the stile leading to a path that descends into the start of Two Brooks Valley. Once in the valley we turned right following the WPW to Bottoms Hall Cottages, this was the site of a mill, of the same name, built in 1811 and owned by James Rothwell. Bottoms Hall Wood is classified as a Grade 2 Site of Biological Importance due to the range of flora and fauna. 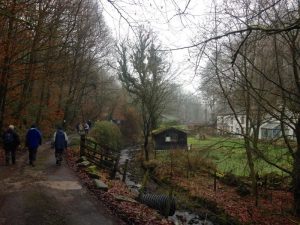 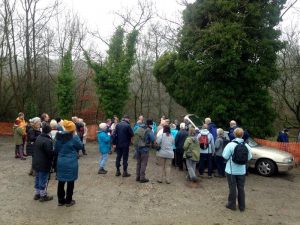 Continuing through the valley we made our way onto Two Brooks Lane and to Hawkshaw Tennis Club where we stopped for the customary mulled wine and mince pies, where it was a bit like the Bible story of the of feeding of the five thousand. 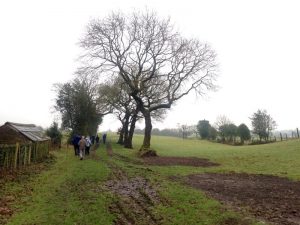 And back to Greenmount

From the tennis club we joined a muddy footpath which lead through the woods onto Bolton Road where we turned right and after a short distance turned left onto a narrow footpath which eventually brought us to Spenleach Lane. Turning right onto the lane we re-crossed Bolton Road making our way into the fields where we headed back to Greenmount having covered a gentle 4 miles