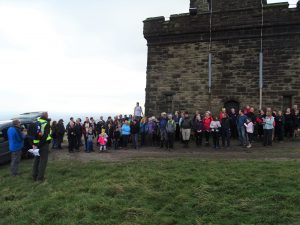 After two weeks frantic organising and promoting the sponsored walk we were pleased to see that 90 walkers, including many families with young children, had joined at Peel Tower for the start of the walk. Also joining us at the Tower, to give their support, were the Rossendale Mountain Rescue Team with a number of their specialist vehicles.

The day was unusually warm for mid-October, with no forecast of rain, although the moors were very wet from the previous weeks’ rain. 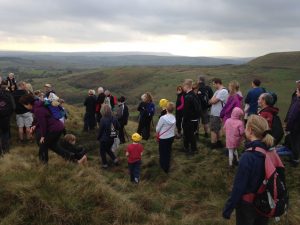 We started the walk by heading towards the double kissing gates at the rear of the Tower and walking in the direction of Harcles Hill. Before reaching the foot of the hill we turned right on a path which dropped down to Moor Bottom Road turning left and headed in the direction of Helmshore. Along the track we enjoyed clear views of the Rossendale Valley and in the distance Pendle Hill. Our first stop was at Robin Hood’s Well, an ancient well used by Pilgrims on their way to Whalley Abbey. 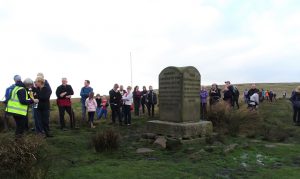 From the well we turned left up the steep path leading first to Ellen’s Cairn, which is a memorial to Ellen Strange who was murdered on these moors in 1761, and then on to Pilgrims Cross, which is a monument to signify the medieval cross that stood on this spot until it was vandalised in1901.

The route them took us across the very wet moors, back towards the Tower and along the edge of the valley which overlooks Hawkshaw, the Holcombe Rifle Range and the site of the recent archaeological dig. The distant views across the West Pennine Moor included, the Welsh Hills, Affetside Village, Winter Hill and Darwen Tower. 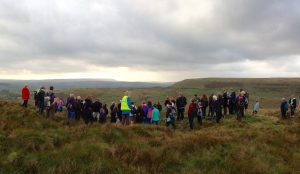 As we made our way back to the starting point, of the walk, we could see the BBC Countryfile film crew on top of Peel Tower filming our return. We then had to wait several minutes before Tom Heap, the Countryfile Presenter, joined us to walk the last few metres back to the Tower. Filming and interviews took place around the Tower where we celebrated a successful day having walked 5 miles and collected Â£600 on the day for Children in Need, with further money to be donated via the Countryfile website. The Children in Need programme will be showing on BBC on Sunday 29th October 2017. 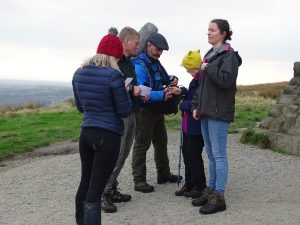 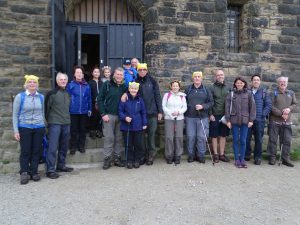