On another glorious spring morning seven walkers set-out from Wilders wood car park to complete the third section of the West Pennine Way (WPW) in an anti-clockwise direction. Turning left we walked along George’s Lane until we met the WPW at Pike Cottage where we turned right and followed the way-markers over Wilders Moor to the Two Lads cairns, turning right on the service road leading to the Winter Hill masts. One of our tasks on these walks is to replace any missing way-markers, which we had to do at our next junction where we turned left onto a path leading to Holden’s Plantation.

This area of moor was badly affected by the fire that destroyed both vegetation and wild life last summer and it was pleasing to see that the Woodland Trust had replace the damaged fences and replanted hundreds of saplings. Following the new sections of footpath, we made our way to Holden’s Farm and Coal Pit Lane following the lane until we reached Roscows Tenement Clough, here we turned left and climbed steeply through the tree onto Smithills Moor.

At the top of the climb we turned right and descended back down to Coal Pit Lane stopping at the memorial stone which commemorates the mass trespass and taking the opportunity to have our morning coffee.

The mass trespass to place in 1896 when Colonel Richard Henry Ainsworth erected gates across access roads to Winter Hill. This caused public outcry which led to a small advertisement appearing in the Bolton paper, paid for by the Social Democratic Federation. It invited the public to join a demonstration on Sunday morning, 6 September 1896, to test the right of way over Winter Hill. Unfortunately, the trespass was not successful and it took another 40 years before the moors were opened to the public. 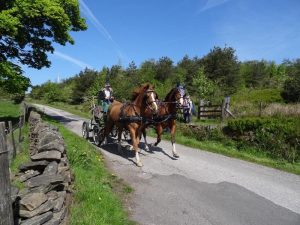 We continued along Coal Pit Lane until we came to a stile on our left where the WPW goes back up onto Smithills Moor, before climbing over the stile we stopped to allow two prancing horses pulling a small trap pass by.

Once back on the moor we climbed up to Dean Mills Reservoir which was a deep blue colour reflecting the clear blue sky above. From here we had to replace several way-markers as the moorland fire had destroyed the fences along with our markers. 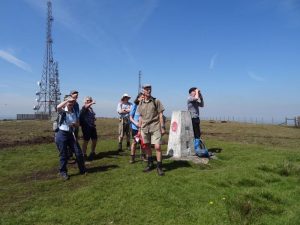 From here the WPW follows Dean Ditch almost to the summit and trig point of Winter Hill (456m) where we spent time admiring the view. At this point we left the route of the WPW as it drops down into Belmont, a section already covered in a previous walk, instead we made our way over the moor, past two cairns and down to Belmont Road turning left and heading to the Pigeon Tower and lunch. 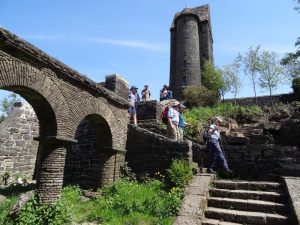 By this time the sun was very hot and we were relieved that our route, after lunch took us through the shade in Rivington Gardens. As we walked passed the Italian Lake, Cascades and the Japanese Gardens it was pleasing to see all the work that was being done, mainly by volunteers, to renovate the gardens and we look forward to spending more time in the gardens on one of our Friday walks. 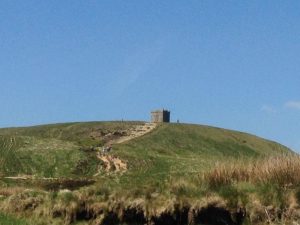 Once out of the gardens our next challenge was to follow the WPW up to Rivington Pike, which not all of us chose to do, before following George’s Lane back to the car park having covered 9 very hot miles. 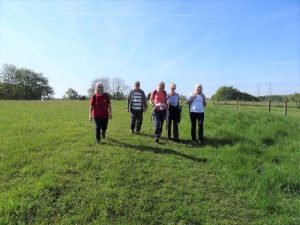 On a perfect spring morning with blue skies and a gentle breeze nine walkers set-out from Greenmount Old School and made our way up to Holly Mount. Once through the hamlet we turned right onto a little used footpath and headed across the fields to Croichley Fold.

Once in the farm yard we turned directly left to find a footpath that was shown on the map but there was little evidence of the path on the ground.

After several minutes we found the direction of the path and made our way through the fields to Holcombe Hay Fold Farm where we spent some time admiring the collection of rusty cars and ancient farm machinery. 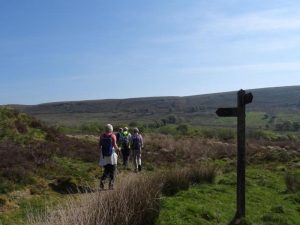 Turning right passed the farm buildings we were greeted with wonderful views across Holcombe Valley and up to Holcombe Head with all the hawthorn trees in full bloom and apple trees with their white and pink flowers reminding use just how beautiful the West Pennine Moors can be. The footpath along the head of the valley passes Paddies Pond a reminder of the industry which made use of the natural resources found in this area. 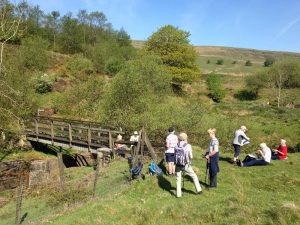 Further along the path we arrived at the site of the excavation work done by the Holcombe Moor Heritage Group (HMHG).  HMHG carry out archaeological excavations each year in the Holcombe Valley. More information about this can be found on their website holcombemoorheritagegroup.org. Members also investigate the history of the Holcombe Valley by looking at various documents. The group host a series of talks in the winter months on different historical subjects and also hold other events, such as guided walks at different times in the year.

On reaching the bridge over Red Brook we decided to have a coffee break whilst filling in the questionnaires from Greater Manchester Transport as this walk was included in their May Walking Festival.

Having been refreshed we made our way up onto The Ridge and walked along to the ruins of Higher Ridge Farm where we turned right and headed down into Redisher Wood crossing the stepping stones and following the brook to Simon’s Lodge. 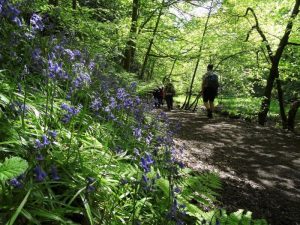 Again we were reminded of how magical this time of year can be as we spent time looking at the small fish and tadpoles in the brook and enjoying the sight of the many bluebells in the wood.

Once through the wood we made our way back to Greenmount having covered a most enjoyable 6 miles.