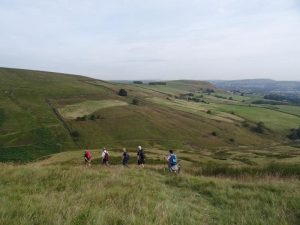 The fifth section of the West Pennine Way (WPW) started at Bull Hill and in order to get to the starting point eight walkers set out from the lay by on Helmshore Road and climed up through Buckden Wood to Moor Bottom Road. We were saddened to see that a gate at the top of the wood had been broken, demolishing part of the wall in the process. After turning right for a short distance we joined a footpath, on our left, that climbed up the slops of Bull Hill and onto the WPW where we turned right following the footpath around the hill.The route turns right and heads across Alden Ratches to Fall Bank where we had glorious views across Rossendale Valley in the summer sunshine. 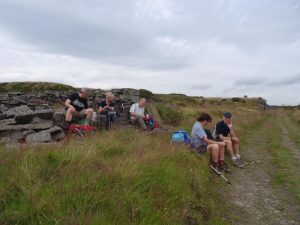 From here we climbed up onto Musbury Heights and to the top of the tramway where we stopped for a coffee break and to replace a way marker as one of the aims of these walks is to maintain the WPW way-markers, which was made easier with the gift of a new electrical screw driver. 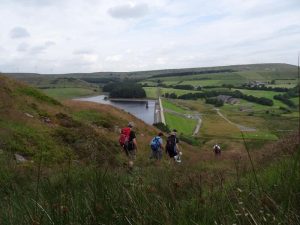 Walking down the Tramway

The tramway was used to transport the finished flagstone down to the valley where they were loaded onto railway wagons and our route took us down the tramway where we had clear views of the valley below. 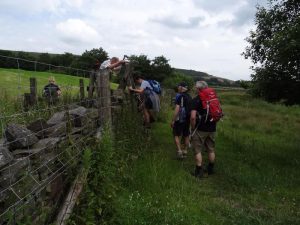 At the bottom we followed the WPW which passes in-between Ogden and Holden Wood Reservoirs and through the fields to Grane Road which we crossed and made our way through Leys End Farm and climbed up onto Haslingden Moor where we had to replace another way marker before turning left.

The walk across the moor to Clough Head was made more enjoyable by the abundance of wildlife which included, the sighting of, grey wagtails, oyster catchers, lap wings, wheatears, grouse, several painted lady butterflies and a couple of hares. 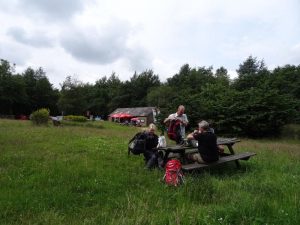 Once at the information centre and cafe we enjoyed lunch before leaving the WPW for another day. We headed back by following a footpath, to the right of the café, through the woods until we came to a track overlooking Jamestone Quarry. 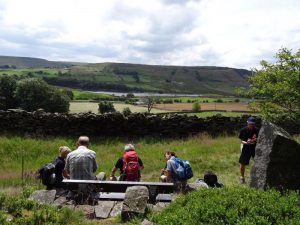 Once on the track we turned right and followed a wide green path that skirted around the edge of the quarry eventually descending down onto the access road which leads to the quarries where we turned right. After a short distance we joined a footpath on our left that lead us behind Leys End Farm and into Mary’s Wood that was planted in memory of a local farmer’s wife. The path along the edge of the wood has a number of difficult stiles to climb but eventually we arrived back on the Grane Road, which we crossed and turned right at Holden Wood Antiques onto a footpath that crossed the embankment of Holden Wood Reservoir and down onto Helmshore Road. 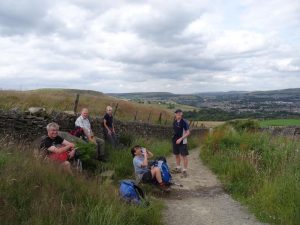 Once across the road we turned left down some steep steps and joined a footpath that followed Ogden Brook into Helmshore. Our intension was to go through Snig Hole Park and on to Irwell Vale however, the footpath was closed due to renovation so we had to climb back up onto Helmshore Road and join a footpath though the fields which took us to the start of Moor Road. The road climbed steeply past Robin Hood’s Well and back to the Buckden Wood where we retraced our steps through wood back to the lay by having covered 13 enjoyable miles.