This walk is the last of four walks tracing a possible route that Saxon Monks may have taken between Whalley Abbey and Manchester Cathedral. Greenmount Village Walking Group have been involved in creating this countryside route which is described in detail in a recently published book, written by one of our walk leaders, Christine Taylor, entitled, Pilgrims’ Way from Whalley to Lichfield and the mystery of Pilgrims’ Cross. Produced by Holcombe Moor Heritage Group, see our website for more details on how to buy a copy.

Fifteen walkers, pilgrims for the day, assembled at St Mary’s Church, Radcliffe, on a much drier day than when we finished the third walk in this series and were able to spend time looking around the church and ruins of Radcliffe Tower. The tower is the only surviving part of a manor house. It is a Grade I listed building and a Scheduled Monument. The house was rebuilt in 1403 by James de Radcliffe, who was lord of the manor of Radcliffe. 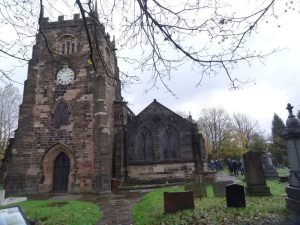 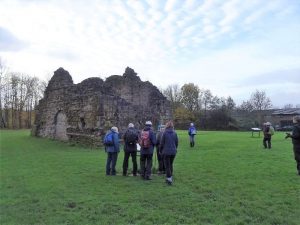 From the tower we made our way past the Old Tithe Barn and headed through the back streets of Radcliffe to the start of the Sustran cycle Route 6. By now we had left the urban environment behind, and we were able to enjoy the green lanes where there was evidence of the industrial past, which had been replaced by modern works of art that are part of the Irwell Sculpture Trail. Once through the woodland we joined a footpath along the side of the River Irwell where we had our first sighting of the new high-rise buildings in the centre of Manchester. 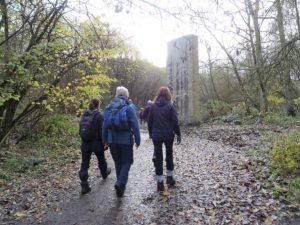 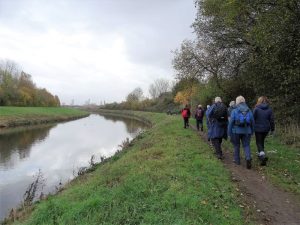 Leaving the river footpath in Lower Broughton we crossed Frederick Road and entered Kersal Wetlands, the recently developed flood barrier that made an attractive site for our lunch stop. After lunch it was only a short distance into the centre of Manchester and our final destination, the Cathedral, where we spent some time admiring its inertia and in particular The Angel Stone that dates back to around AD700. 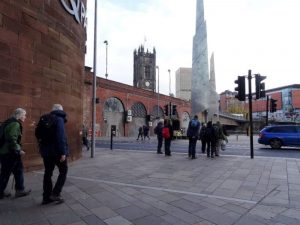 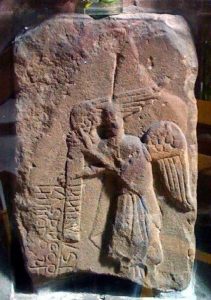