3rd OF 9 WALKS TO COMPLETE THE WEST PENNINE WAY 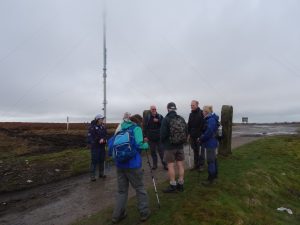 Eight walkers set off from the San Marino Restaurant to complete the third section of the West Pennine Way (WPW) on a dull overcast morning. We made our way across Belmont Road and through a kissing gate onto a steep path leading to the summit of Winter Hill (456m). The low cloud meant that we could not see the top of the TV mast or the surrounding countryside, but we could hear the sound of moorland grouse. On reaching the summit we could still only see the lower section of the tower so we decided not to go to the trig point but instead follow the WPW which at this point turns in a southerly direction. The path follows Dean Ditch across the moor and as we descended the clouds started to lift and we were treated to views across the Pennines and in the distance we could clearly see Greater Manchester and an added bonus was that we also saw the grouse that we had heard for some time. However, we were disappointed that we had not seen any UFOs as according to the Manchester Aerial Phenomena Team the moors are a ‘hot spot’ with sighting in 1950, 1999 and 2006.

Turning right through a kissing gate we followed the path that goes along the edge of Dean Mill Reservoir, which looked uninviting on a misty morning so we took a left turn and made our way down to Coal Pit Lane. Here the WPW turns right and follows a track that passes the Mass Trespass Memorial Stone which commemorates the 10,000 people who in 1898 walked onto Smithills moors demanding the right of access. We continued to follow the track to Roscow Clough Tenement where we enjoyed our morning coffee break.

After coffee we continued passed Holden Farm on to two large stone cairns, referred to as, the Two Lad. From here we had a good view of Rivington and Anglezarke Reservoirs and our next climb, that of Rivington Pike where we enjoyed views of The Lake District hills, the Fylde Coast and the hills of North Wales.

From the tower we retraced our steps and followed the WPW into Rivington Gardens where we ate our lunch overlooking the Orchestra Lawn. We were pleased to see that recent restoration work had uncovered more of the remains of The Bungalow that was part of Lord Leverhulme’s estate which he purchased in 1900. 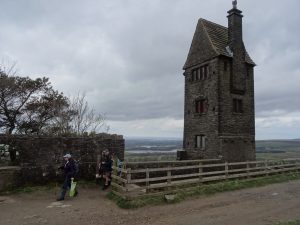 After lunch we climbed up to the Pigeon Tower where we left the WPW for another day and continued down a wide track, known as Belmont Road to its junction with Rivington Road where we turned right for a short distance and took a footpath on our left which lead back to Belmont Village. 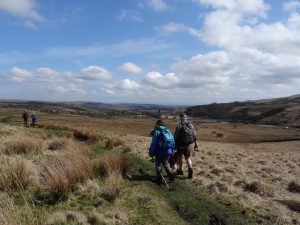 On the way we had sunny views of the Pennine Hills and were treated to the sight of a buzzard flying overhead. On reaching the car park of San Marino Restaurant we had covered a distance of 11.5 miles.