7th of 9 Circular Walks to comlete the West Pennine Way 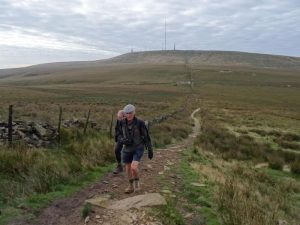 This walk was the last in the series of walks advertised in the booklet to promote the South Pennines Park Walk & Ride Festival and it was also the seventh walk to complete the West Pennine Way (WPW) this year. Nine walker set out from the lay-by on the Belmont to Rivington road on a beautiful September morning and made our way across the moor in the direction of Great Hill. 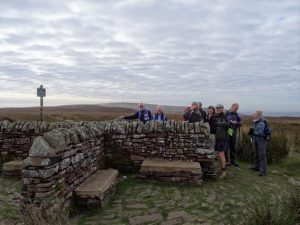 Once at the summit of the hill we stopped for some time to enjoy the views which were limited due to an autumnal mist but we could easily see the local landmarks such as Winter Hill and Darwen Tower. 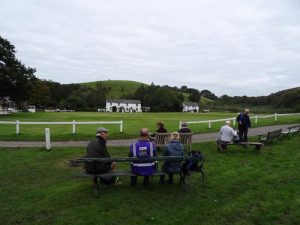 From the summit we headed in a westerly direction stopping at the ruins of Drinkwater Farm where we checked to see if the memorial to fell runner Chorley Joe was still intact and to make a donation in the drinking cup. After walking a short distance from the ruins we turned left onto a footpath that descended steeply down to the village of White Coppice where in the 1920s there was a stone quarry and cotton mill. The mill together with the railway line, that serviced the village, were demolished in the early 1950s. We made use of the benches around the picturesque cricket field to have our morning coffee before following the WPW in the direction of Rivington.

After leaving the village we turned left, just after passing an attractive lodge, on our right, and headed along a farm track to White Coppice Farm. Once past the farm we joined a path through the fields down to Moor Road where we turned left cross a bridge over The Goit, a small canal constructed to join the chain of reservoirs. From here WPW follows the Woodland Trail along the edge of Anglezarke Reservoir where we enjoyed the view looking down the reservoir in bright sunshine.

At High Bullough Reservoir we tuned left and climbed up to Moor Road passing through a stile, facing the Manor House, we turned right and walked down the road to Jepson’s Farm. Once through the farm we headed through the fields, with a glorious view of Yarrow Reservoir on our right. At the head of the reservoir we crossed Alance Bridge and continued along the WPW into Rivington where we stopped for lunch on the village green.

After lunch we walked along Sheep House Lane for a short distance before turning right and walking through the woods to Rivington Hall Barn where we started the steep climb into the gardens. 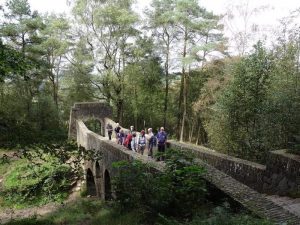 The gardens were designed by Thomas Hayton Mawson for Lord Leverhulme and were constructed between 1906 and 1922. The site was bought by Liverpool Corporation in 1948 and was opened to the public, but by this time most of the building had been demolished. In 2016 £3.4 million in funding was secured from Heritage Lottery Fund and shortly afterwards, with the help of many volunteers, work begun to restore the gardens. As we climbed the many steps up to the Pigeon Tower we were amazed at the progress that is being made with the restoration. 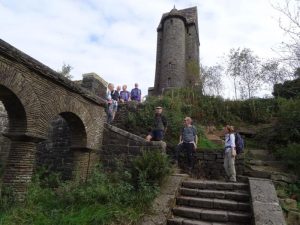 The tower marked the end of section 7 of the WPW so we headed down Belmont Road back to the lay-by where we started the walk having cover 10 glorious miles.