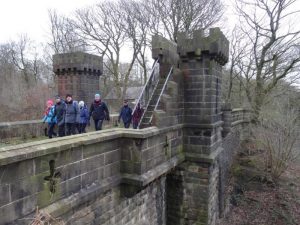 This walk was another opportunity for us to cover a section of the West Pennine Way (WPW) to make sure that all the way markers were still in place and the footpaths were being maintained. Ten walkers started the walk from Turton Tower on a cold and overcast morning with the forecast of rain later. After leaving the car park we turned right and made our way over one of the ornate footbridge which span the Bolton to Blackburn railway line. The bridges were built in 1847 in a style in keeping with the rest of the Turton estate. 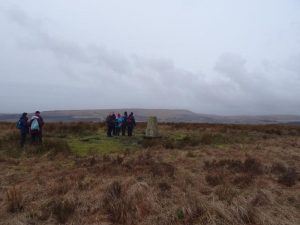 Following the WPW we turned right onto a wide track and after a short distance we turned left through a kissing gate onto a footpath that climbed steeply over the moor to Cheetham Close (329m) where at the trig point we were able to see what remains of the megalithic stone circles thought to date back to around 2000 BC. The circles were demolished by a disgruntled farmer in the 1870s to discourage sightseers on his land. 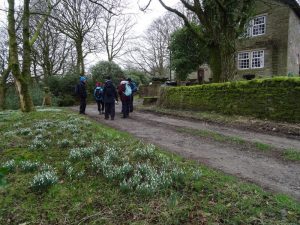 Leaving the trig point, we headed for a stile in a stone wall where the WPW turns left and starts to descend, off the moors, and it was from here that we had clear views over to Winter Hill and Belmont with Delph reservoir below us. Eventually the footpath joined an access road where we turned left and headed down to Dimple Hall, which was built in 1688 for a barrister, Sergeant Welch and where there was a beautiful display of snowdrops. 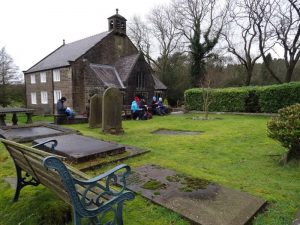 Once into Edgerton we crossed Blackburn Road and headed over the fields to Walmsley Unitarian Church (circa 1712) where we took an early coffee break, as by this time it had started to rain. 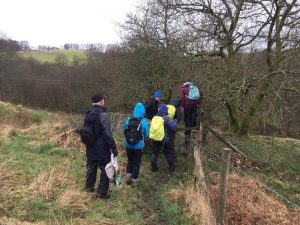 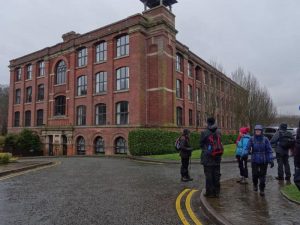 Once safely across the road we turned right towards Dunscar Business Park and Eagley Cricket and Tennis Club, where a group of long bow arches were just finishing their morning session. These recreational facilities were part of the model village, built to house the employees in Eagley Mills. The first mill was built in 1780 but in 1820 the site was bought by the Chadwick brothers who developed it into what we see today. The mills ceased production in 1972 and more recently have been developed into apartments. 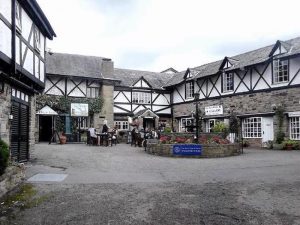 Lunch at the Last Drop

Leaving the mill, we made our way through the village onto Hough Lane where we started the steep climb up to The Last Drop and lunch.

Torra BarnAfter an enjoyable lunch we decided to make our way back to Turton Tower via the shortest route as it had now started to rain very heavily, the route took us along the side of Turton Golf Course and Torra Barn before re-crossing the ornate railway bridge having covered only 8 miles but historic ones.