4th of 9 walks to complete the West Pennine Way 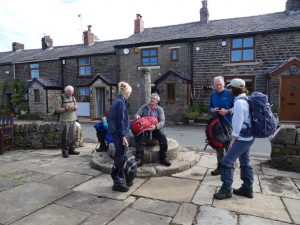 Today’s walk, Affetside to Bull Hill, is the fourth section of the West Pennine Way (WPW) to be walked in an anti-clockwise direction. Seven walkers set out from Greenmount Old School to walk to the start of this section on a dull and overcast morning and headed in the direction of Hollymount with the aim being to go through Croichley Fold but a fallen tree blocked the path so we had to back-track and walk down into Two Brooks Valley. Once in the valley we climbed up past Burt House Farm crossing Turton Road and joining a track that lead us to Affetside and the WPW.

By now the clouds had started to clear so we decided to have an early coffee stop at the old cross in the centre of the village. The WPW goes down Watling Street past the Pack Horse Inn turning left at Mum’s Harris Farm, which has recently been sold. Turning right through the farm yard we climbed over a stile into the notorious Yeoman’s Field which for once was reasonably dry and the cows where at the far end of the field. We were doubly rewarded with the sight of a large hare that ran the full length of the field and we followed in the same direction to Windmill Farm where we stopped to admire the beauty of the renovation work before dropping down to Turton Road.

After crossing the road, we were faced with a very overgrown footpath with the hedges completely concealing the entrance and things did not get any better when we started to descend through the wooded valley as the recent heavy rain had made the surfaces very slippy and we decided that once again we were on an adventurous walk. 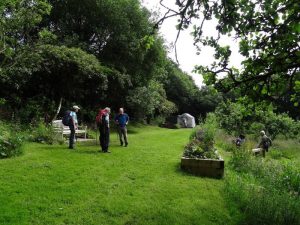 Safely back in Two Bottom Valley we headed to Hollymount Orchard where we stopped. to admire the work done by Incredible Edible in reviving the trees.

Still following the way-marked route we headed towards Hawkshaw crossing Bolton Road onto Spenleach Lane where after a short distance we turned right, through a farm gate, and headed across the fields to Simon Sundial Cottage and down into Redisher Wood. 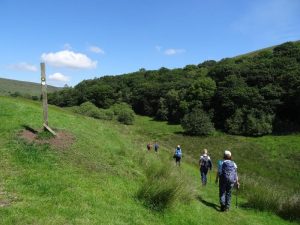 Dropping down from the Ridge

Once across the stepping stones we climbed up to the ruins of Higher Ridge Farm and through the valley up to Moorbottom Road where we turned right and after a short distance we turned left and made the steep climb onto Holcombe Moor.

Our next stop was at Peel Tower, opened in 1852 to commemorate the life of Sir Robert Peel and it is believed that it was paid for by the residents of Ramsbottom.

From the tower we headed over Harcles Hill to Pilgrimes Cross and lunch. The original cross was standing in 1176 but was destroyed in 1901 being replaced, with the present cross, in 1902. 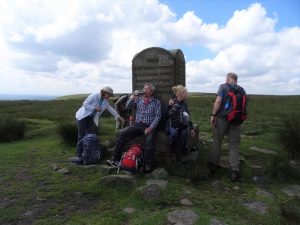 After lunch, as the red flags were not flying, we headed to the summit of Bull Hill, which completed the fourth section of the WPW.