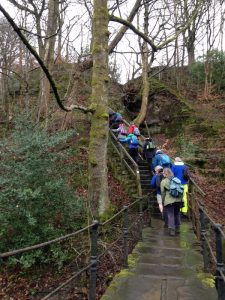 We were pleasantly surprised that fifteen walkers turned up to start the walk on such a dull rainy morning. From Ramsbottom Station car park we crossed over the railway line and turned right along Peel Brow onto Bury New Road and turning right into Nuttall Hall Road where we walked as far as Jacob’s Ladder, which presented us with the first climb of the day. 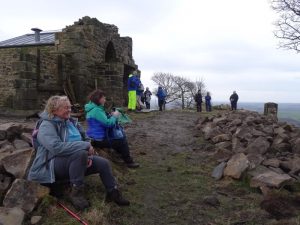 At the top of the climb we headed for the bridge that spans the M66, which we crossed over and climbed up to Manchester Road where we turned right for a short distance before crossing the road taking a footpath that took us up to Grants Tower. 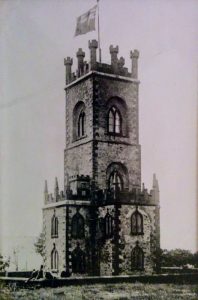 Grant’s Tower as it was

The tower was built at Top o’ Hoof and is said to stand at the spot where the Grant Family first looked down on Irwell Vale. It was built in 1783 by the Grant brothers to commemorate their father, and it is said to have collapsed in 1944. 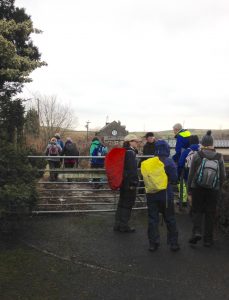 After taking a short break at the tower we headed for Bury Old Road which we walked down as far as Mam Hill House where we turned left onto a footpath leading to the hamlet of Buckhurst. Just before we passed through the gate into the hamlet we saw what looked like seven sika deer in a field but they were so well camouflaged that we were not able to photograph them. 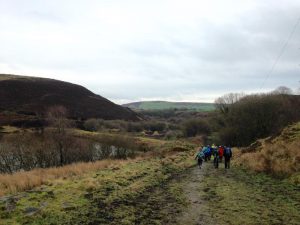 Once through Buckhurst we crossed a very muddy field onto a track which lead into Deeply Vale and on into Cheesden Valley. Deeply Vale was the site of a series pop festivals in the 1970s that introduced the sound of punk into the music scene. 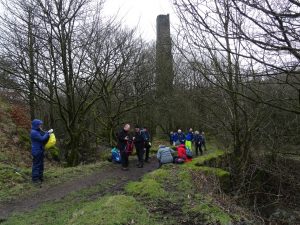 Following the very muddy footpath we walked through the valley following the stream as far as the ruined chimney of Washwheel Mill. This was the last of the fifteen mills, in the valley to close (1919) and was mainly used for bleaching of cotton waste. 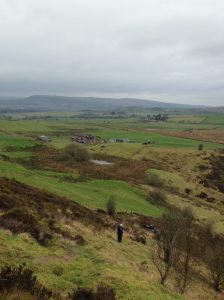 After crossing the stream, we climbed steeply out of the valley onto Scotland Lane where we had views looking back towards Peel Tower and overhead a buzzard circling. Turning left we walked along the edge of Birtle Dene as far as the path on our right that headed for Old Birtle, the site of the Normandy Restaurant which has now been converted into apartments. From here we crossed the top of Birtle Road onto a farm track which took us down onto Castle Hill Road where we turned right for a short distance before turning left and passing through Taylor’s chicken farm and heading down into Limefield. 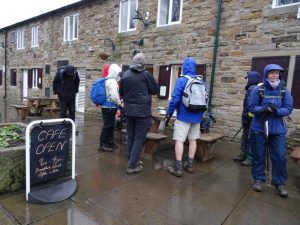 From Limefield we crossed Walmersley Road and walked down Arley Avenue tuning left at the sign post for Burrs Country Park and more importantly the Lamppost Café where we had lunch. Burrs is one of Bury’s earliest industrial sites and is notable for its use of water to power the mills. The oldest building still standing on the site is the Brown Cow Public House which was built as a farm in 1752.

After a most enjoyable lunch we followed the footpath alongside the river Irwell back to Ramsbottom having covered 11.5 enjoyable and interesting, if not wet, miles.