5th of 9 CIRCULAR WALKS TO COMPLETE THE WEST PENNINE WAY

This walk started at the Pigeon Tower Car Park Rivington, the point at which we finished the walk in May. Initially five walkers left the car park and headed up the track to the Seven Arch Bridge, which is a reminder of the grandeur of Lever Park built by Lord Leverhulme in the 1900s, but which sadly has been allowed to decay over the years. However, the good news is that, thanks to a grant from the Lottery Fund, work has begun in earnest to renovate the site and this work can be seen all over the gardens. 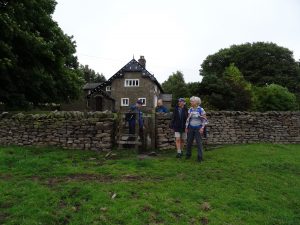 Turning right just after the bridge we climbed up to Jessop’s Farm where we had views of Anglezarke Reservoir and a much smaller reservoir, that of High Bullough, built by Chorley Council before Liverpool City built the larger Anglezarke reservoir in 1857. It was around here that we were joined by the sixth member of our group who had managed, with much effort, to catch us up.

We made our way across more fields, where we saw a rather large curlew, and headed for Manor House, which originally was called High Bullough. Opposite the house we turned left and joined the Woodland Trail which we followed to White Coppice. 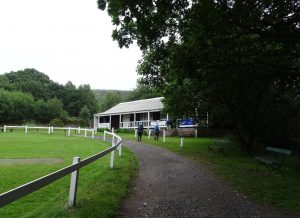 The cricket pavilion was an ideal spot to stop for lunch and we were joined by a group of walkers from Chorley U3A, who had the same idea. We found that it was also a popular spot for the local bird life and we saw, two grey wagtails, a thrush, several blackbirds and a heron. 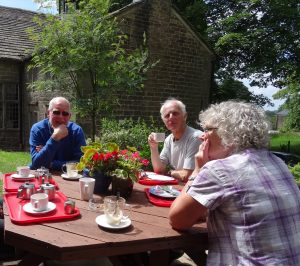 Once refreshed we followed The Goit back to Anglezarke Reservoir taking the path on the opposite side we walked as far as the embankment, which we crossed. From here we turned right onto a path that followed the banks of Lower Rivington Reservoir all the way back to Rivington where we enjoyed a refreshing cup of tea at the Village Green Tea Room, having covered just less than 12 miles.