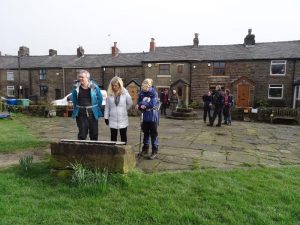 This was the first of nine walks to complete the West Pennine Way (WPW) in an anti- clockwise direction. A group of ten started the walk by making our way out of Jumbles car park, following the WPW, down the slope into Kingfisher Valley where we walked along the footpath as far as Bradshaw Hall Fisheries turning left into Slack Lane. Once across Bradshaw Road we continued along Slack Lane up to Crompton’s Farm and joined a footpath leading to Affetside where we spent some time looking at the old cross in the centre of the village. Although it stands at the side of the Roman road, known as Watling Street, it is most likely medieval in date and may have been a route marker or market cross.

We turned right, along Watling Street for a short distance, passing The Pack House pub on our left before turning right onto a footpath, opposite Trinity Presbyterian Church. At this point we left this section of the WPW for the time being and headed to the hamlet of Top O’ Knotts continuing down to Lower Knotts and on into Bradshaw. After re-crossing Bradshaw Road into Rigby Lane we made our way passed the cricket club and up to Turton Road. From here we turned right for a short distance before crossing the road onto a footpath which passed the ruins of Birtenshaw Old Hall and down to Eagley Brook. 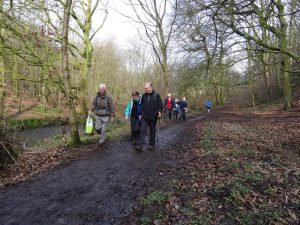 After following the brook for a short distance we crossed over a bridge and continued to follow the brook up stream on the other bank. The footpath took us through an attractive valley full of bluebells that will be a picture when they are in bloom. Once out of the valley we arrived at Eagley Mills. The complex of former cotton mills is adjacent to a model village originally built for the millworkers. 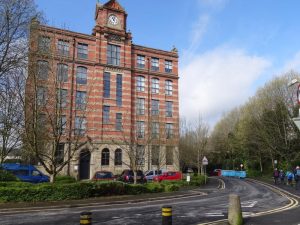 The mill buildings have now been converted into attractive residential apartments. There were mills on this site in the late 18th century, taking advantage of Eaglet Brook, which flows through the site, to power the machinery. The present day mills opened in 1820 and ceased production in 1972. 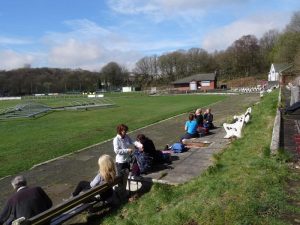 In addition to the houses the model village included, a school, library, bandstand, bowling green and cricket pitch which we made full use of for our morning coffee break under blue skies. Most walkers took advantage of the break to shed a couple of layers of clothing as the temperature had increased by this time and the clouds had disappeared.

Once across Blackburn Road we made our way alone Longworth Lane in the direction of Dunscar Golf Club, all the time following Eagley Brook. The track eventually joined a section of the WPW in Longworth Clough which we continued to follow until we reached Walmsley Unitarian Church where stopped to eat our lunch in the memorial garden, not for the first time.

After lunch we followed the WPW passed Dimple Hall and up onto Cheetham Close where we spent some time admiring the glorious views over the West Pennine Moor and searching for evidence of the stone circle, which we found. It was also pleasing to listen to the first sounds of the sky larks and to watch the lapwings circle overhead.

Reluctantly leaving the summit we headed for Turton Tower café and afternoon tea. The final section of the WPW took us back to the Jumbles car park having covered a distance of 12 glorious miles.