9th of 9 walks to complete the West Pennine Way 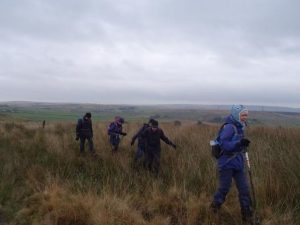 Six hardy walkers started this final walk in the West Pennene Walk (WPW) series outside St Mary’s Church on the Roman Road in Grimehills on a very overcast and windy morning. Following the way-marked route across some very wet moorland we headed for Pleasant View Farm passing the railway tunnel air vent on our left. Once at the farm we joined the track leading down to the A666 passing the disused coke kilns on our right. After crossing the road, we followed the route up to the area known as Bull Hill where the footpath goes through a gated property that has recently been extended. The next farm on the route is Prospect Farm on the edge of the moors where we turned left through the farm yard where we were joined by a sheep dog who guided us up to the woods near Hall Moss Farm where we had difficulty persuading the dog to go home. 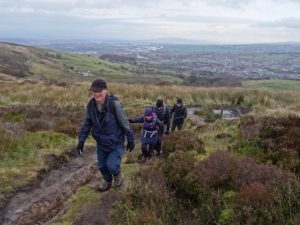 From here the WPW continues across Darwen Moor where we had misty views of the town below with the elegant chimney of India Mill which was the tallest and most expensive in the country when it was completed in 1867. 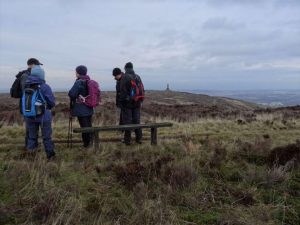 View of the tower

Further along the route we had views of the Jubilee Tower which is on the WPW but as we had covered that section of the route in a previous walk we took a path on our left just before the tower and headed in the direction of Cartridge Hill.

Before we reached the summit of the hill we sheltered from the wind behind a stone wall to have our lunch. Cartridge Hill is the highest point on Darwen Moor (401m) and from the summit the whole of the WPW route can be seen and it was agreed to return on a clear day to enjoy the views. During the English Civil War Cromwell’s troops, following a group of Royalist were forced to retreat rather than follow them over the moor. Hence a stream whose source is from the moor is called Steptback Brook. 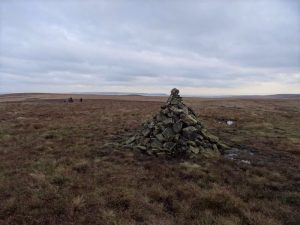 Once refreshed we headed across the moor in the direction of the Witton Weavers Way (WWW). 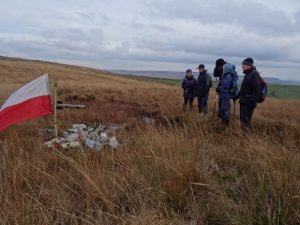 On reaching the footpath we turned left and one of our group, who is local to the area, suggested that she could lead us to the site where the wreckage of a second world war aeroplane could be found. The wreckage is on Wives Hill and is a North American Mustang MK11 of the RAF Polish Squadron which crashed on Darwen Moor on the 29th July 1945. The plane was being flown by a polish pilot, Herbert Noga and he was on his way from Preston to Colitshall.

Back on the WWW we headed down to Cadshaw and the A666 which we crossed and turned left for a short distance before taking a footpath on the right leading to Edge Fold Entwistle where properties had been extended over the right of way making it difficult to find the route. Once through the properties we found more obstacles in the form of fallen trees in Bank Wood before joining a track that lead back to the Roman Road and Grimehills having covered 12.5 historical miles.