Link Route down to Lumb

On what turned out to be the hottest day since the summer of 1976 five walkers left Lumb Carr car park to complete the first of two sections to walk the Link Route to the Pennine Walk. Due to the high temperature it was decided to walk along Moor Bottom Road to Robin Hood’s Well missing out the climb to Bull Hill, which we climbed on the last section of the WPW.

Now will this poison me? Robin Hood’s Well

The route drops down to Lumb Village from Robin Hood’s well passing through farm land which happened to contain several inquisitive cows which we had to deal with. Our first steep climb of the day took us to the village of Edenfield and up to the view point on Cowpe Lowe. In addition to walking the route we had taken spare waymarkers to replace any that had been removed. 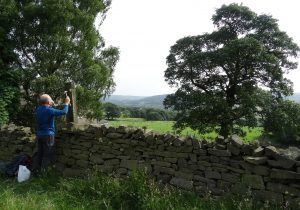 Waymarking on the Link Route

At Cowpe Moss we met up with three additional walkers who had come from Bacup to complete the walk with us. The next section of our route took along Rooley Moor Road which is also known as Cotton Famine Road due to the nature of it’s construction. It was completed in the 1860’s during the time of the American Civil War when the lack of cotton had forced many of the cotton mills to lay off workers. At the time the British Government passed a Public Works Act which allowed towns’ Board of Guardians to borrow money to fund such projects as Rooely Moor Road in order to provide work for the redundant cotton workers. We enjoyed a well earned lunch sat on the side of Rooley Moor Road before heading towards Cragg Quarry. At this point of the walk a choice of routes is available, one passes through Lee Quarry the other goes across the moor along the side of the only working quarry, Britannia Quarry. Three of us chose to walk through the quarry with others going across the moor so that we could check that the waymarkers were still in place. The final section of the walk climbs up Jam Hill before dropping down into Shawforth. Having covered a distance of just under 12 hot miles our last challenge was to return home using public transport. 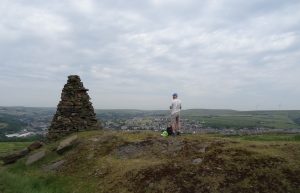