2nd OF 9 CIRCULAR WALKS TO COMPLETE THE WEST PENNINE WAY 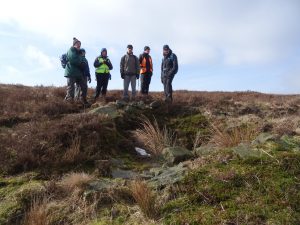 The second section to the West Pennine Way (WPW) circular route started at Turton Tower where seven walkers left the ancient pele tower, built in 1420, and made their way over the railway bridge following the way-markers onto Cheetham Close. Once at the trig point we spent some time looking at what remains of the Early Bronze Age stone circle and enjoying the sight of a number of skylarks, a good sign that spring is on its way. Continuing to follow the way-markers we descended down onto a track to Dimple Hall, a private residence built in 1688. Just after the hall we turned left into a very muddy path which eventually crossed Cox Green Road and followed a stream down to the A666, which we crossed and followed the path behind the bus turning circle that took us to Walmsley Unitarian Chapel where we enjoyed a coffee stop in the memorial gardens.

Suitably refreshed we made our way along a path between two stone walls built alongside Delph Reservoir which passes several waterworks buildings where we admired the artistic details carved into the stonework making them both functional and attractive. 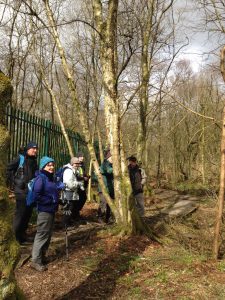 Once on Longworth Road we turned left and walked to Higher Croitchley Fold Farm where we turned right and followed a path down into Longworth Clough Nature Reserve. We continued on the path that runs alongside Eagley Brook, passing many sections of the path that had suffered in the winter floods of 2015. Having safely negotiated our way to the head of the valley, where there is an attractive mill lodge known locally as the Ornamental Lake, we turned left and climbed up to the San Marino Restaurant and the end of the WPW for another day. 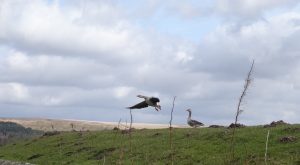 Our return journey continued along Belmont Road, in the direction of Bolton, but only as far as Spring Reservoir where we turned left onto a track that took us to Dingle Reservoir. Here we surprised a flock of greylag geese who took to the air as we arrived.

From here the paths shown on the map were not very clear on the ground and we had to make our way through undergrowth that resembled a jungle.

Once through the worst of this section we stopped for a well-earned lunch that was made more enjoyable by the sight of a lone buzzard flying overhead.

Our way back to Turton Tower took us through Egerton, Turton Golf Club and passed Torra Barn. We had covered a distance of 11.5 miles having enjoyed lots of sunshine and seen oystercatchers, pied wagtails, curlews and lapwings along the way.