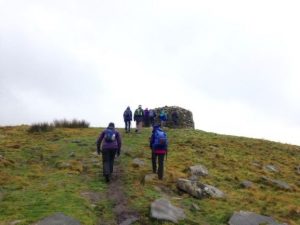 Wilderswood car park was a new starting point for our Wednesday walks and eleven walkers set-out along George’s Lane on a bright chilly morning in the direction of Pike Cottage. We had not walked far when we turned right onto a footpath which climbed steeply across Wilder’s Moor and up to Crooked Edge Hill where there are two cairns in memory of two lads that froze to death having been lost on the moor, the exact date of the event is still contested. The larger of the cairns appeared to had been rebuilt after the moorland fires and evidence of the fire could be seen all across the moors with large areas still devoid of any vegetation. Many footpaths had also been destroyed due to bulldozes having been used to create wide fire-breaks.

Before reaching the summit of Winter Hill we turned right and headed down across Smthills Moor to Green Nook where we stopped for a coffee break. Refreshed we joined a track that lead down to the plaque which celebrates a mass trespass on the moor.

In 1896 Colonel Richard Ainsworth took the decision to close Smithils Moor to the public for grouse shooting. 10,000 Boltonians marched up Smithills Road and on to Coal Pit Lane to show how strongly they felt that the moor should remain public. This continued for three further weeks, with even more in attendance each week. Despite the huge turnout, it still took over 40 years for the moorland to open to the public, partially due to the smaller but more famous Kinder Scout trespass in the Peak District.

Once on Coal Pit Lane we headed down to Smithills Hall and lunch where we enjoyed the food and the warmth as by this time the temperature was starting to drop.

The land on which Smithills Hall stands has been owned by, among others, Roger de Poictou, the Knights Templars, Richard de Hulton, and William de Radcliffe who built the current medieval hall (originally entirely timber framed) in the 14th Century. Numerous families have loved and maintained the buildings through the following generations. Smithills Hall is now owned by the people of Bolton through their Council with whom the Friends of Smithills Hall work in partnership. 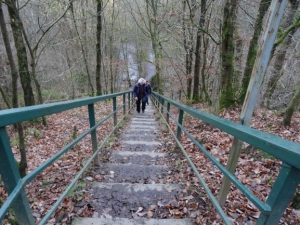 After lunch we crossed Smithils Road and made our way to the picturesque conservation village of Barrow Bridge and warmed ourselves up by climbing the sixty three miner’s steps, at the end of the village. At the top of the steps we followed the footpath to Walker Fold and along Burnt Edge, where we were pleased to see that hundreds of saplings had been planted by the Woodland Trust.

As we headed back over Wilder’s Moor the snow started to fall and we were pleased that we had not far to walk before we joined the track leading to the car park having covered a distance of 10.5 miles.