This month’s long walk started at Helmshore Textile Museum where twenty-one walkers turned left out of the car park and walked as far as Park Road where we turned right and followed the tack, which climbed steadily up to Musbury Heights. Once at the top of the Heights there remains clear evidence of the stone quarry that closed in the 1920s and the steep tramway which transported the stone down to the railway that transported the stone to Haslingden. 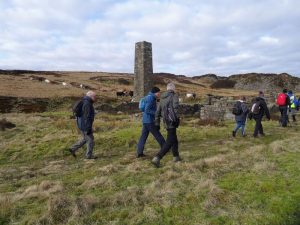 As it was a clear sunny morning, we had good views of the reservoirs and the valley below. The area was once home to 1300 people scattered across hamlets and farms until the building of Ogden Reservoir in 1912 when people were encouraged to leave in order to reduce polluting the reservoirs. 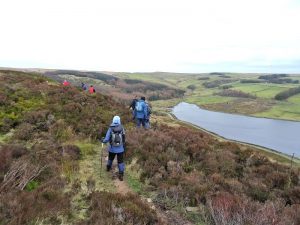 We followed the footpath towards the head of the valley until we arrived at the junction with the West Pennine Way (WPW), where we turned right and descended through Hog Low Clough and followed a footpath through the woods back out onto the moors passing ruins of several farmhouses along the way. 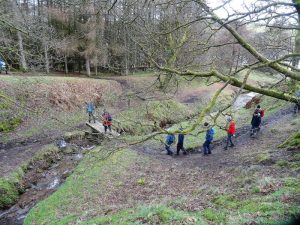 At this point it was time for a coffee stop and we made use of one of these ruins to rest and discuss the lives of the previous inhabitants, in particular the practice of whisky distilling, giving them the name, ‘whiskey spinners’ as spinning, and weaving was their legitimate living. 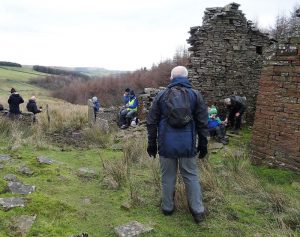 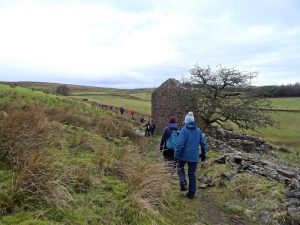 Once refreshed we continued along the track towards Grane Road, which we eventually crossed and climbed up onto Haslingden Moor, turning right and heading for Clough Head Information Centre. Not before we made use of the toilets, we continued our walk passing Jamestone Quarry and Mary’s Wood, and eventually arriving at Holden Wood Café where we had booked lunch. 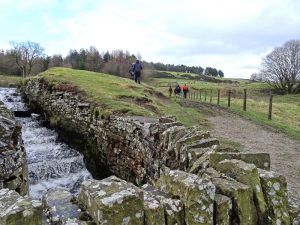 After enjoying a very sociable lunch it was only a short walk, back to the car park in Helmeshore having covered 10 glorious miles. 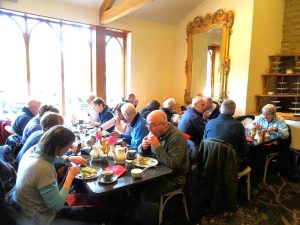