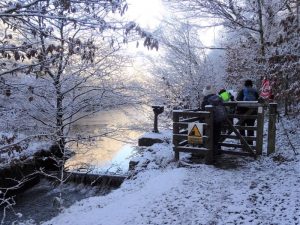 The morning had all the ingredients for a glorious walk, clear blue sky, bright sunshine, freshly fallen snow and good company. Ten walkers were not disappointed when they made their way passed the Hare and Hounds Pub along Holcombe Old Road and into Redisher Wood as they were greeted with a picture postcard view of the wood. We followed the footpath through the wood to Simon’s Lodge, which also looks splendid with the sun reflecting on the icy surface of the water.

At the end of the wood we joined the West Pennine Way (WPW) footpath, as is decends from Simon Sundial Cottage, turning right and heading for the stepping stones over the brook which were covered in a thin layer of ice making them difficult to cross. 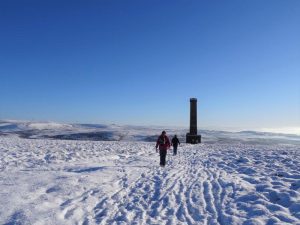 We followed the path up to the ruins of Higher Ridge Farm and down through the valley and into the woods where we climbed steeply up to the ruins of Taylor’s Farm. From here the WPW turns right, onto Moor Bottom Road for a short distance before turning left taking a path which took us onto Holcombe Moor and to Peel Tower where we turned left and headed across to Pilgrim’s Cross, where we stopped for a coffee break. 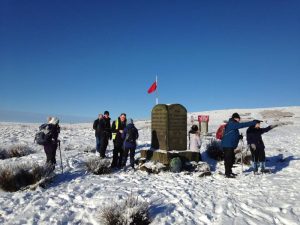 As the MOD red flags were flying we were not able to go over Bull Hill but instead followed the WPW Alternative Route around the hill to join the footpath which leads across Alden Reaches. 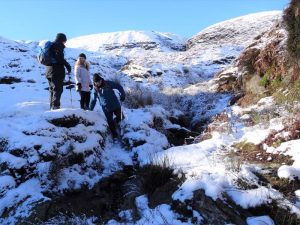 The footpath descends steeply down to Alden Brook which we found difficult to cross due to the icy conditions. Once safely over the brook we left the WPW and turn right heading for lunch in Helmshore.

Lunch had been pre booked at The Village Café where we enjoyed a varied selection of food and were entertained by a new member to our group who turned out to be a poet. This was particularly poignant as on the early walks, over twenty years ago, it was customary to end each walk with a poem. 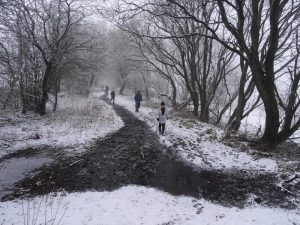 After lunch we turned left down Woodbank into Snig Hole Park and made our way to Irwell Vale, by this time the weather had changed and a cold mist descended into the valley. From Irwell Vale we followed the footpaths into Strongstry and onto Stubbins were three members of the group headed for a bus stop. The remaining members followed the river Irwell into Ramsbottom and onto to Summerseat and back to Holcombe Brook having covered a distance of 13 glorious miles