Nine walkers assembled in Dunnockshaw, which is a village just outside Rawtenstall, and began the walk by joining the Burnley Way. The footpath skirts around the side of Nutshaw Hill from where we had good views over towards Clowbridge Reservoir. The reservoir was created by flooding the village of Gambleside of which there are still enough remains, on the site, to get a feel of village life. 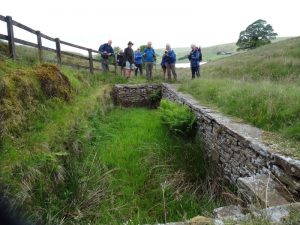 Remains of a baptism font

The route eventually crosses Manchester Road and heads steeply up towards Crown Point Road eventually crossing Burney Golf Course before dropping down into Towneley Park where we enjoyed our morning coffee. The hall which dates back to the 14th century is now owned by Burnley Council who appear to take very good care of it. 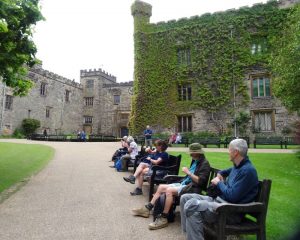 After coffee we headed across the park into the attractive village of Cliviger, which is thought dates back to Saxon times and is on the upper reaches of the river Calder. Once through the village we re-joined the Burnley Way and climbed steeply back up to Crown Point, but this time headed for the Ringing Singing Tree which was designed by Mike Tonkin and Anna Liu in 2006. It is one of four panopticon sculptors to symbolise the renaissance in East Lancashire. The other three sculptors are, The Atom, near Pendle, The Halo in Rossendale and The Colourfields in Blackburn. 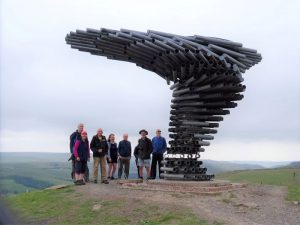 We spent some time listening to the sounds produces by the sculptor before making our way across the moors back to Clowbridge Reservoir having covered 10.5 historic miles.