Twenty-two walkers, a record for a long walk, set out from Greenmount Old School and headed down Brandlesholme Road as far as the first footpath on the left where we made our way across the field and over Longsight Road heading down into Wood Road Lane. After crossing the bridge, over the river Irwell, we climbed the steps up to the railway line and across to the footpath where we turned right and followed the path down to Springside Road. Once on the road we turned left and headed into Walmersley taking the Old Road for a short distance before turning right on a path leading to Carr Bank Lodge. From here the path climbs steeply over the M66 and up to Walmersley Golf Course, which we crossed and turned right up Scotland Road taking the first stile on our left down to Deep Moss Farm. The footpath goes around the farm and drops down into Cheesden Valley where we stopped for a coffee break at the ruins of Washwheel Mill. This was one of fifteen mills in Cheesden Valley and Birtle Dean that made use of the brook to provide waterpower and is the only one with a chimney still standing. 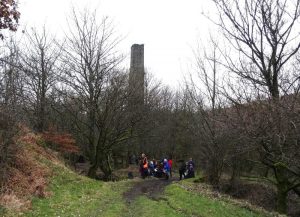 At this point we originally intended to walk up to Buckhurst but when we recede the walk we decided it was too muddy for an organised walk. Once refreshed we followed Cheesden Brook along a very muddy footpath before climbing out of the valley up to Stand Lee Farm, with its distinctive fire engine. Continuing along the track we turned left after Yates Farm and headed along the embankment of Ashworth Reservoir. 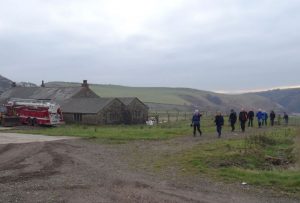 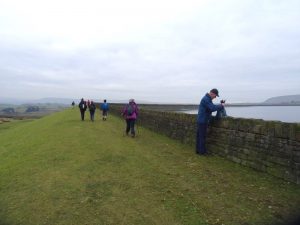 The next familiar sight was that of the ruins of Four Acre Mill, at Lumb Bridge, which we passed on our left-hand side before crossing over Croston Close Road to join a footpath that took us over Harden Moor. On reaching the trig point at, 297m, we enjoyed 360-degree views of the West Pennies where we could make out familiar features that we had passed on previous walks. 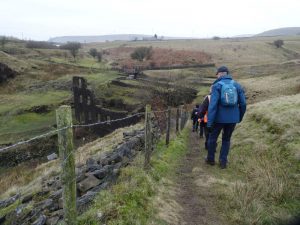 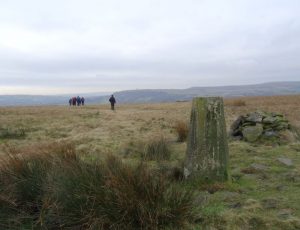 Once across the moor we climbed down to Bury Old Road taking the first track on our right that took us down to Park Farm Café where we had a very enjoyable lunch. 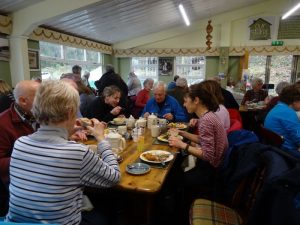 As a large tree a been blown over by the strong winds, obstructing the path down Jackob’s Ladder into Nuttall Woods, we decided to separate into two groups, with the more adventurous group going down the ladder and the other group going down New Road. As it happened the tree had been removed that morning and the two groups were able to meet up on Nuttall Hall Lane to complete the final leg of our journey back to Greenmount, but not before having to climb over more trees that had been blown over in the gales. The distance walked was, a comfortable 11 miles. 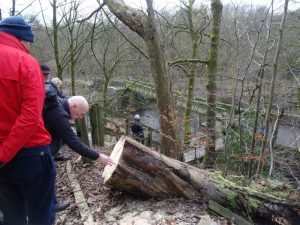 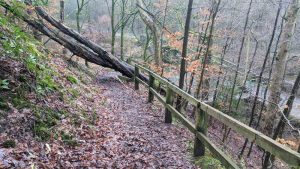 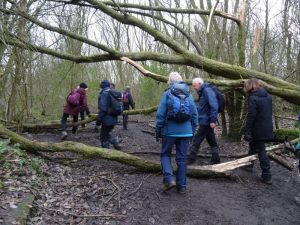