The second of the Link Route walks started in Exchange Street, Edenfield with eighteen walkers heading along Market Street, in the direction of the Parish Church, to the point at which we concluded the walk in March. Once on the way marked route, we turned right along East Street at the end of which we turned left climbing over into Hey Meadow and then over another stile joining where we joined Gin Croft Lane. 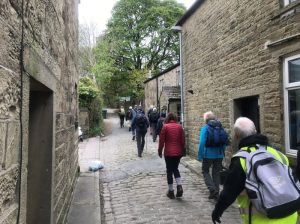 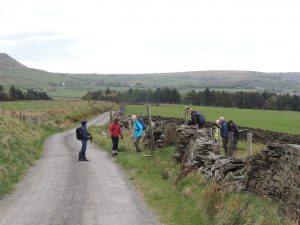 At the top of Gin Croft Lane, an area known as Black Hill, we turned right onto Sand Beds Lane and continued along the route where we had clear views of Cowpe Lowe, on our left. After passing through the remains of several stone quarries, and with views overlooking Cowpe Reservoir we took shelter from the cold wind to enjoy a coffee stop in the ruins of Cragg Quarry. 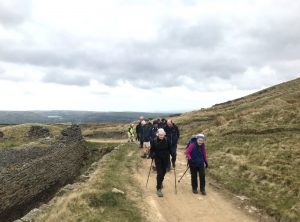 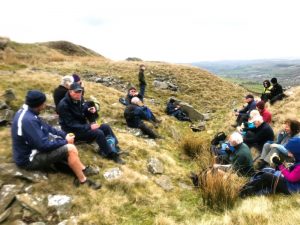 Once refreshed we continued along the track until we reached a junction with Rooley Moor Road, coming up on our left from the village of Cowpe. Rooley Moor Road, also known as Cotton Famine Road, was built by cotton workers who at the time were unemployed due to the cotton shortages caused by the American Civil War. It is at this point where we leave the Link Route for this month and where we start the continuation of the route next month. After discussing where we intend to start next month’s walk, we turned right climbing steeply over the moor to the Trig Point and Boundary Marker on Top of Leach (475m). 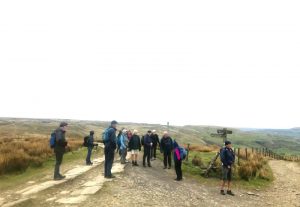 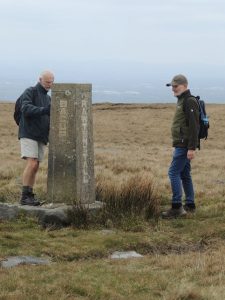 Boundary Stone on Top of Leach

Continuing over the moors we headed for the turbines on Scout Moor and our lunch stop at Waugh’s Well. Edwin Waugh was a writer of dialect poems (1817 to 1890) who lived in Rochdale. 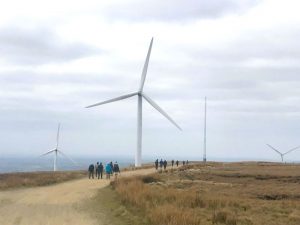 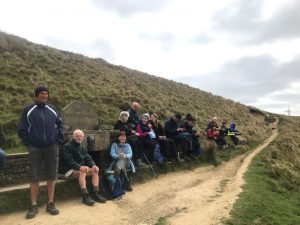 After lunch we descended into the valley of Scout Moor Brook following the brook along a disused tram track into Dearden Wood. Once in the wood we spent some time looking at the ruins of Plunge Mill, in particular the splendid waterfall alongside the area where the waterwheel was housed. From here it was a short distance back into Edenfield have cover 10 historic miles.

Climbing up from Scout Moor Brook 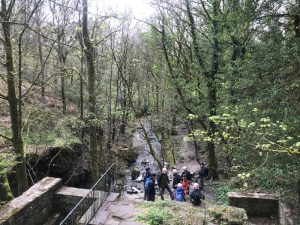